Glenville, WV-The 40th anniversary of Earth Day, Thursday, April 22nd, was a fitting date for the continuation of the ongoing reclamation effort at Yeager Airport in Charleston, West Virginia. The project is a partnership between the Glenville State College Land Resources Department and Yeager Airport to environmentally reclaim the land that was disturbed during the extension of the runway.

Approximately one hundred students and community volunteers gathered at the site to continue the massive tree planting in an effort to reforest the slope below the runway. Students from Glenville State College were joined by students from Washington and Lee University of Virginia, and fifty students from Edison Middle School in Parkersburg, West Virginia. “I was very impressed by the effort that was given by these students from other schools. It is rewarding to see their concern for the environment in an area that is far from their campuses,” said Rick Sypolt, GSC Professor of Forestry and Land Surveying and Department Chair. Students from Pfeiffer University of North Carolina, Oberlin College of Ohio, and West Virginia Wesleyan College participated in three other plantings earlier this spring.

The Earth Day activity included a special planting of twenty-nine flowering pear trees, one in honor of each of the miners who were killed in the Upper Big Branch mine explosion on April 5th. GSC graduate William Roosevelt Lynch ’72 was among those killed in the disaster. Glenville State College President Dr. Peter Barr joined West Virginia Governor Joe Manchin, Secretary of State Natalie Tennant, and other dignitaries for the planting ceremony.

Over three-thousand trees supplied by the West Virginia Division of Forestry were planted on the day. To date, the reclamation project has planted over ten-thousand red oak, locust, Norway spruce, Scotch pine, and Chinese chestnut trees at the airport. “The reclamation of the hillside should be completed in a year or two. A normal survival rate could mean that within five years or so, the land will be reforested which should help hold the hillside in place and also provide a very aesthetic view of the area,” said Dr. Bob Henry Baber, GSC Major Gifts Officer who has been spearheading the project.

“This has been a terrific service learning experience for our students. It has certainly surpassed our expectations. GSC President Dr. Peter Barr should be commended for his support and vision. He gave the green light to this green project,” said Baber. 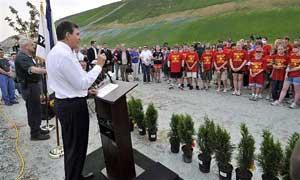 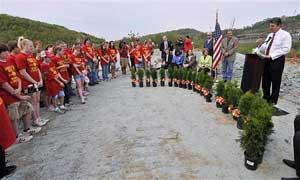 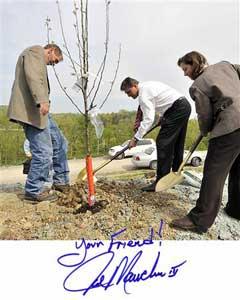 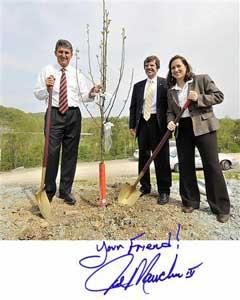 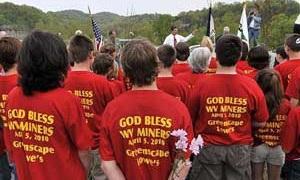 Many West Virginians, Kanawha Valley residents, and countless numbers of unknown out-of-state travelers have been disconcerted and confused at the apparent carnage visited along the base mountain of Yeager Airport over the past four years. Why, people wondered, was such a visible mountain being denuded? Alas, despite the best efforts of Yeager Airport to inform the public, many did not know that the FAA had given them a stern ultimatum: extend the runway 1,000 feet for safety reasons-or cease commercial aviation altogether! Given such a mandate the Airport Board authorized the project which began in earnest in 2005 with the cutting of roads and the clear-cutting of trees. This was soon followed by extensive blasting and the hauling of 3 million cubic yards of fill materials to the front of the mountain where the new runway has now been built and is currently being used. To put it in perspective, this is about one third of the 9 million cubic yards moved from 1944 to 1947 to create Yeager Airport in the first place. In this latest construction project 146 acres were disturbed, with 27 acres requiring hydro-seeding. Initially, that was all that was planned. But since Glenville State College “Adopted” the Airport an enhanced plan that includes massive tree plantings by hand has been created.

To be sure, progress on extending the runway was happening, but to many the aesthetic and environmental costs of the project seemed high indeed. Initially, their concerns proved to be right. Erosion problems soon caused $15,000 in West Virginia Department of Environmental Protection fines and $10,000 in corrective actions. Sedimentation of the Elk River, mud slides (including a portion along the walking trail), and wildlife degradation followed directly and inevitably on the heels of the required excavation. Negative media coverage and citizen outcries underscored public concerns. Jerry and Pam Grady, who three years earlier had bought a home about 50 yards from the southern end of the Elk River trail at the bottom of the mountain, had this to say, “The trail featured crested dwarf iris, multiple wild flowers, and an array of hikers, cross country athletes, bikers , rafters and families. People of all ages enjoyed it. But we watched in dismay when, during a wet period, the trail was destroyed in two places-with one section falling into the Elk altogether. Even the abandoned railroad grade was covered by a soupy mud that cascaded from the trail and the hillside above.”

Although the Airport’s contractor tried to fix the slips, the denuded mountain continued to move. It was during this period that Glenville State College’s nationally recognized Land Resources Department began exploratory talks with the Airport to see if the college might assist in the efforts to stabilize the mountain short-term and foster native tree growth for the long haul. On September 12, 2008 a Memorandum Of Understanding between Glenville State College and Yeager Airport was signed that simply stated that GSC , in close cooperation with Yeager, “intended to reclaim the site to the greatest extent possible over the next several years.”

“This historic partnership represents a unique confluence of need and ability,” said Yeager Airport Director Rick Atkinson. “We have the need and Glenville State College has the ability. Their students will gain vital real world experience, while Yeager and our community will have a reclamation effort that is second to none. This is a win-win opportunity for us both.”

That fall Glenville State College President Dr. Peter Barr planted the first Blue Spruce trees along the Elk River Trail and commented, “These trees are the first of many-along with numerous native shrubs and flowers-that will be planted by our Land Resources students under the direction of faculty members. We’re pleased to be teaming up with Yeager Airport officials on this timely project.” Yeager Airport Board Chariman Ed Hill said, “Our objective is to go above and beyond the basic requirements of the law to create a reclamation project that will be viewed as a model of exemplary public stewardship.” Kanawha County Commission President Kent Carper added, “I’m very proud of the Airport and Glenville State College for having the courage to ‘think outside the box’ in order to partner on this important project.”

After a February 2009 intervention GSC land Resources Department Chair Rick Sypolt said, “We’ve scattered redbud seeds on steep slopes in the view shed of I-79 in hopes of seeing germination along with hydro-seeded grasses. ”

This spring 1,500 trees were planted by GSC students, sorority volunteers, and local Boy Scouts. Species included black locust, poplars, sycamores, and other native species. GSC Senior Robert Jackson said of the efforts, “Our involvement to aid the project offers the perfect opportunity for students to apply skills learned in the classroom. The community benefits by allowing students to build skills while giving something back to the community. GSC has a great opportunity to reach out and improve minds and nature. As a proud native of the Kanawha Valley, I am grateful to have this opportunity.” Another Senior, Jennifer Cool, added, “The work that will be done will dramatically improve the appearance of the area for West Virginia residents and our guests.”

On May 18, 2009 the Charleston City Council unanimously passed a resolution introduced by Kasey Russell praising the virtues of the project and congratulating Glenville State College and Yeager Airport for their environmental leadership. Since then GSC has gathered additional resources and expertise from the Capitol Conservation District, local businesses, and others. The GSC Foundation, which is spearheading the fund-raising efforts, is now approaching Kanawha Valley Foundations for much-needed support. When repairing and upgrading the handicap-accessible trail the traverses the mountain and joins Coonskin Park with downtown Charleston is included, the project could cost as much as $500,000. To date, only about 8% of the disturbed land has been reclaimed and as many as 20,000 more trees may need to be planted depending on variables such as weather, soil type, deer browsing, and erosion. Therefore, in addition to financial resources, GSC will require hundreds, if not thousands of volunteer hours to successfully complete the task. Ideally, GSC plans to facilitate massive fall and spring plantings with diverse volunteers from across West Virginia and beyond. Traveling volunteers will likely camp and shower at Coonskin Park which is an integral partner to the intervention. Interestingly, Coonskin itself was created on June 27 and 28 1950 when more than a half-million dollars in equipment and hundreds of skilled workman and volunteers began a two-day blitz on the slopes and valleys to the east of Coonskin Ridge, transforming them into the Park. Thus, this new “Adoption” could well replicate the model created nearly 60 years ago but with a modern twist: after a hard day of planting the evenings would end with a celebration of free Appalachian music, storytelling, poetry, and dance. Perhaps the festivities could end as the Coonskin blitz concluded its intervention-with fireworks. Additionally, local “green” vendors would be solicited to provide food for the volunteers and the general public which would be invited to attend the cultural events for modest donations to augment the purchase of topsoil and indigenous flowers, shrubs and trees.

Currently, GSC and the Airport are printing 20,000 brochures documenting the intervention. Also a five minute DVD is being edited that will chart the reclamation process from the initial blasts through the reclamation process. Future plans include distributing this DVD to schools throughout West Virginia. Already the “Adoption” has been extensively covered by West Virginia media outlets including a front page color spread in the Charleston Gazette and multiple stories on major t. v. stations. It is anticipated that the “Adoption” may well become national and even international in scope-especially through e-green networks.

From recycled toilet paper to hybrid cars to wind farms, these days it seems everybody is trying to get on the “green” band wagon or at least paying lip service to the concept. Of course, good rhetoric is a start. But here in West Virginia, which Forbes magazine ranked last year as the “brownest” State in the Union and (adding insult to injury) further stated that there was little hope for change in the future, “walking the talk” has proved to be difficult. That’s why Glenville State College’s “Adoption” of Yeager Airport is so exciting to residents who want to see the mountain that was moved to extend the runway reclaimed to the greatest extent possible. There’s every reason to do precisely that: the hillside runs parallel to I-79, is in plain view of patrons of Coonskin Park, and can be seen by commuters and air travelers. Furthermore because of its location in the capitol city, the argument can be made that the mountainside is highly symbolic of the way West Virginians relate to their environment. In fact, it wouldn’t be an over-statement to say that ‘if ever a West Virginia mountain deserved tender, loving reclamation– this is that mountain!” In the “Adoption” of Yeager Airport we all have a special opportunity to positively impact one highly visible site here-and to change the perception of West Virginia and West Virginians everywhere.

Perhaps Jerry and Pam Grady summed it up best, “Trees are the best hope for holding the soil in place. We hope efforts to reclaim the hillside will continue, thus allowing hundreds of local citizens, young and old, rich and poor, to once again enjoy the beauties of nature along the Elk River Trail.”